New contract or bust for Eagles star Jenkins: I won´t be back under the same deal 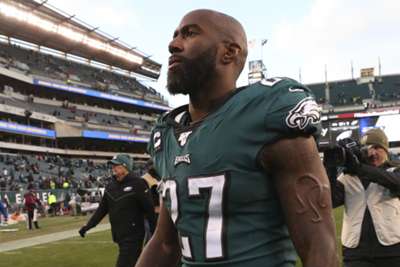 Philadelphia Eagles safety Malcolm Jenkins wants a new and improved deal and he will not return to Lincoln Financial Field next season unless he does.

Jenkins has a year remaining on his current contract with the Eagles and the two-time NFL Super Bowl champion is trying to renegotiate fresh terms in Philadelphia.

The 32-year-old enjoyed another fine season for the Eagles, tallying 81 tackles, 2.5 sacks and four forced fumbles en route to the NFC wild-card playoffs, which Philadelphia lost.

Now, three-time Pro Bowler Jenkins – who joined the Eagles from the New Orleans Saints in 2014 – wants a pay rise.

"I won't be back under the same deal," Jenkins told reporters on Monday. "That won't happen. ... It's like anything else, you set your value on the market.

"The market is good for safeties right now, and I consider myself to be in the top tier of that group."

"I'm not one to beg," Jenkins added. "I am a very prideful person, so I feel like what I put out there this year, what I put on tape, what I've given to this team is more than enough. I can't do any more. So for me, I feel good about that; that it'll be good enough for me to go into this offseason with certainty that I'll be fine."

"I told myself I'll make it to 10 and then go year by year after that, you know, as long as my body felt good, the money was what I wanted and it was a team I enjoy being on," he said. "Right now I'm physically able, still love the game, I would love to be here, but I understand that this is a business.

"Honestly, I've reached the point where I've done what I can. At this point, it's up to my agent and management. I let my soul bleed every time I touch the field, sacrifice myself, do whatever I'm asked to do. So I'm content with doing my part."