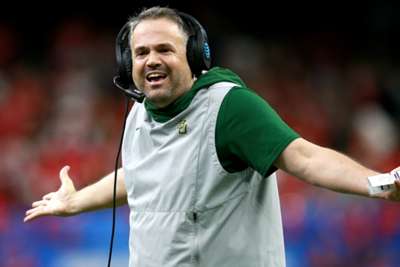 Joe Judge is to become the new head coach of the New York Giants, while the Carolina Panthers are set to hire Matt Rhule.

The two NFL teams have moved swiftly to settle on their new coaches, according to widespread reports.

Judge, 38, has been special teams coordinator and wide receivers coach with the New England Patriots, working under Bill Belichick.

The Giants had also been heavily linked with Rhule, but the Panthers managed to secure his services when it became clear he was not certain to land the job in New York.

Rhule will leave Baylor, where he has turned the Bears' fortunes around in the Big 12, and is poised to become the fifth head coach in the Panthers' history, reportedly on a lucrative deal that could be as long as six or seven years.

One note on the #Giants: Matt Rhule called them before signing his 6-year deal with the #Panthers and gave them the opportunity to match and lure him to get on the plane. They declined and hired Joe Judge instead.

However, the Panthers have decided to hire Baylor coach Rhule, who was linked with the New York Jets last offseason before they opted to hire Adam Gase.

Rhule's previous NFL coaching experience is limited to a season working with the Giants' offensive line, but he has acquired many admirers for his work as the head coach of Temple and Baylor in college football.

In December, the Panthers fired Ron Rivera, who was last week appointed as the Washington Redskins' head coach.

Judge, meanwhile, will replace Pat Shurmur in New York and look to turn around a team who have not won a playoff game since their Super Bowl triumph in the 2011 season.

He will have building blocks to work with in the form of exciting but turnover-prone quarterback Daniel Jones and running back Saquon Barkley, the former NFL Offensive Rookie of the Year.

With Mike McCarthy having officially joined the Dallas Cowboys on Tuesday, the last vacancy in the league is that of the Cleveland Browns.