McCarthy ´jumped up and hugged´ Jones after Cowboys hiring 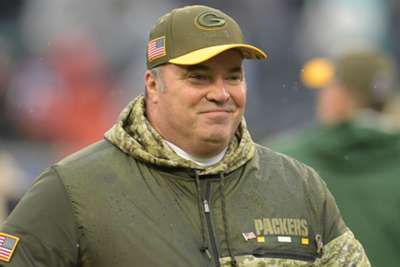 Mike McCarthy revealed he jumped up and hugged Jerry Jones after being told he was to become head coach of the Dallas Cowboys.

McCarthy was officially presented as the replacement for Jason Garrett on Wednesday at the Cowboys' Ford Center in Frisco.

The former Green Bay Packers coach spent the 2019 season out of the league having been fired from his previous position in 2018.

However, Jones was impressed enough at interview to hand him the reins to one of the most storied franchises in the NFL.

McCarthy spoke of his excited reaction to Jones' comments, telling a media conference: "I jumped up and hugged him. That's a moment and a story I'll be telling the rest of my life."

Asked what expectation he faces taking arguably the highest profile job in the league, McCarthy replied: "The tradition and history here is so unique, it's an iconic franchise.

"When you think about expectation, the goal will never change here, it's about winning championships, but the expectation is to trust the process."

Quarterback Dak Prescott is due to be a free agent in the offseason. However, the Cowboys are expected to eventually sign him to a lucrative extension.

McCarthy has worked with Joe Montana, Brett Favre and Aaron Rodgers in his career, and he is relishing the prospect of providing tutelage for Prescott.

"I'm excited about the opportunity to work with Dak. What he's done so far is very impressive," he added.

"I've always been impressed with him, you're going to be able to run the whole offense and then some.

"Our offensive system will be based around making the quarterback successful. We've got a great one to work with."