49ers´ Sherman slams critics: In big games, I show up 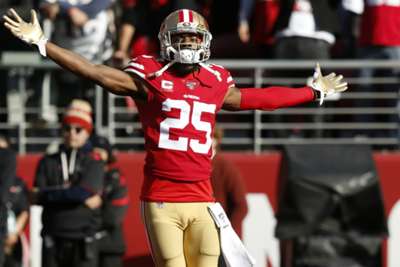 Richard Sherman hit out at his critics after helping the San Francisco 49ers advance to the NFC championship round in the NFL playoffs.

A five-time Pro Bowler and Super Bowl champion with the Seattle Seahawks, Sherman intercepted Kirk Cousins in the third quarter which led to a Tevin Coleman touchdown as the 49ers' defense suffocated the Vikings.

"I get tired of excuses for why I'm good. 'Oh my god they're playing zone, oh my god it was this guy, oh my god the receiver slipped'. Why don't other people get those opps then?

"It's odd. It's like people got frustrated that I was so confident early on in my career, so people wanted me to fail. When I didn't fail, it's like how do we tear him down in other ways. I'm too consistent on a yearly basis. Since I got in the league, every category that matters to a corner, I'm number one."

The 49ers – buoyed by the bye week – will face either the Green Bay Packers or the Seahawks for a place in the Super Bowl after winning their first playoff game since 2013.

49ers head coach Kyle Shanahan added: "I was pumped for the defense. We had a goal going into this game. We thought the team that got over 30 runs would win this game. We truly look at that as a team goal and we ended up getting 47 on offense.

"It's a lot easier to do when the other team goes 2-of-12 on third down. I think we were 45 percent. I think they only ended up being able to get 10 [runs] and when you just see the way the defense is playing, it makes it so much easier to stay with that and I think our whole team kind of fed off it."