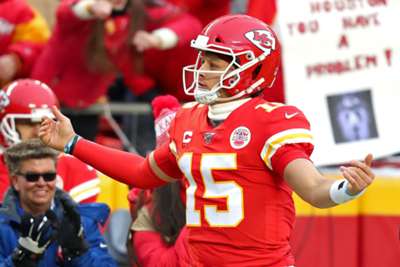 The Kansas City Chiefs scored 41 unanswered points as they incredibly erased a 24-point second-quarter deficit to defeat the Houston Texans 51-31 and book a place in the AFC Championship Game.

A day after the Tennessee Titans' stunning defeat of the top-seeded Baltimore Ravens, another upset appeared on the cards as the Texans raced into a 24-0 lead at Arrowhead Stadium.

Kansas City committed a series of mistakes in a disjointed start that seemingly put the Texans in command, however, the Chiefs found their rhythm on offense in the second quarter and never looked back.

Last season's MVP Patrick Mahomes threw for 321 yards and five touchdowns, while tight end Travis Kelce and running back Damien Williams each scored three apiece in a remarkable offensive performance from Kansas City that ensured they will host the Titans next Sunday.

The prospect of them doing so seemed an unlikely one when Deshaun Watson hit a wide-open Kenny Stills for a 54-yard touchdown and Lonnie Johnson returned a blocked punt for a score to put the Texans up 14-0.

Another special teams error gave the Chiefs a mountain to climb as Tyreek Hill fumbled a punt and the Texans immediately took advantage, Watson connecting with tight end Darren Fells.

However, the Texans' decision to settle for a field goal on fourth down at Kansas City's 13-yard line turned the tide.

Mahomes found Williams for a 17-yard touchdown reception to get the Chiefs on the board and, after the Texans failed with a fake punt and were assessed a 28-yard pass interference penalty, he escaped pressure and fired a sidearm throw into Kelce for a five-yard touchdown.

That pair combined again to reduce the deficit to three points after Houston returner DeAndre Carter fumbled on the kick-off, and the Texans' huge lead was wiped out in just over 10 minutes of game clock when Mahomes delivered to Kelce again with a five-yard throw on the run.

Mahomes led a seven-play, 85-yard drive finished off by Williams to start the third quarter. The same man was celebrating again at the end of the next Chiefs' possession, Kansas City aided by three defensive penalties.

A five-yard touchdown run from Watson gave the Texans some hope, but that was extinguished by a four-play, 72-yard drive that Mahomes capped with a touchdown pass to Blake Bell as the Chiefs moved within a win of Super Bowl LIV.