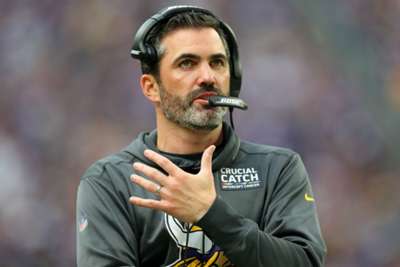 The Cleveland Browns have officially appointed Kevin Stefanski as their new head coach.

Reports emerged on Sunday that the Browns had secured the services of Stefanski, previously the offensive coordinator of the Minnesota Vikings.

The Browns have now confirmed those reports, hiring Stefanski after the Vikings' season was brought to an end with a 27-10 loss to the San Francisco 49ers in the Divisional Round of the NFC playoffs.

Stefanski replaces Freddie Kitchens, who was fired after the Browns endured a disappointing 6-10 season in his only campaign at the helm, with many having considered Cleveland postseason contenders at the start of the year.

"It's very exciting obviously for me and my family," Stefanski said. "We're really looking forward to moving out here and getting situated in Cleveland and the adventure of it all.

"I know we have to add a GM and add some more pieces to this puzzle. I think the eager part for me is to get to work, buckle down and start to put together a program.

"Before you know it, the players are back in the building and we're going to be putting a system together offensively, defensively, etc. I think that's the fun part, when these guys get back in this building."

The Browns will now turn their attention to finding a replacement for former general manager John Dorsey, who also departed after a season that saw the Browns miss the playoffs for the 17th straight year.