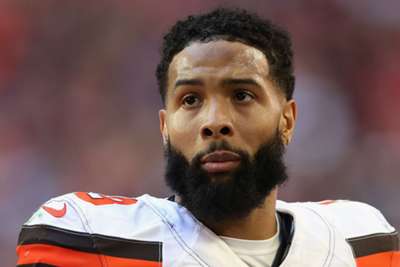 The New Orleans Police Department (NOPD) has obtained an arrest warrant for NFL star Odell Beckham Jr. on a charge of simple battery.

The alleged incident occurred at the Mercedes-Benz Superdome on Monday, when Cleveland Browns wide receiver Beckham was in attendance to watch his alma mater LSU defeat Clemson in the National Championship Game.

Footage emerged of Beckham appearing to slap a security officer's buttocks in the LSU locker room during the celebrations after their 42-25 victory.

A statement from NOPD read: "Today, the NOPD has obtained an arrest warrant for Odell Beckham Jr. on a charge of misdemeanour simple battery in regards to an incident that occurred on January 13, 2020 at the Mercedes-Benz Superdome."

Cleveland later released a statement of their own saying they had contacted Beckham regarding the warrant.

"We are aware of the incident and have been in touch with Odell and his representatives on the matter," the Browns said.

"They are cooperating with the proper authorities to appropriately address the situation."

Beckham had already been involved in one controversial incident after LSU's victory, having been spotted handing out notes to players on the field.

The NCAA has rules that bar college players from receiving certain benefits.

Having initially said they believed the bills to be fake, LSU later released a statement saying "information and footage received since shows apparent cash may have also been given to LSU student-athletes" and that they had contacted NCAA regarding that incident.

The New York Giants selected him with the 12th overall pick in the 2014 NFL Draft and he shot to prominence during his rookie year with an incredible one-handed catch against the Dallas Cowboys.

Beckham went to three straight Pro Bowls with the Giants and was traded to Cleveland back in March.

In his debut season with the Browns, Beckham had 74 catches for 1,035 yards and four touchdowns - the lowest totals he has achieved across a full 16-game season.