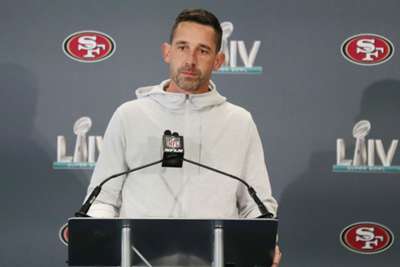 Kyle Shanahan's previous Super Bowl experience left him with "scars" and he vowed not to ease up if the San Francisco 49ers find themselves in a similar position this Sunday.

Three years ago Shanahan was the offensive coordinator for the Atlanta Falcons when they led 28-3 against the New England Patriots in Super Bowl LI.

However, in one of the most astonishing sporting comebacks of all time, Tom Brady guided the Patriots to a fifth Lombardi Trophy with an overtime win that had some criticising Shanahan's second-half play-calling.

The 40-year-old is now the head coach of the Niners and will hope he can finally win a first ring when San Francisco face the Kansas City Chiefs in Miami on Sunday.

"Everyone asks what I learned from that Super Bowl; I wish I could say there was some easy answer that would have fixed us not blowing that lead," Shanahan said on Tuesday.

"I go back and I'm hard on myself on everything. I know the plays I wish I called differently, especially a second-and-11 pass once we got down there [near the end zone] that led to a sack. That was about it.

Kyle Shanahan is LIVE from Miami ahead of #SBLIV. https://t.co/wxrqVaSa2b

"You realise when you're playing good teams, good quarterbacks, that you can never relax.

"No matter what situation I've been in since then - you can ask our players, our coaches - I freaked out at [defensive coordinator Robert] Saleh when he tried to take the starters out against Minnesota

"We were up like three scores with two minutes to go and I freaked out. Then I did the math and I thought it was alright.

"You get some of that scars from that stuff so guys were messing with me with that but besides that, it's about that."

Another of Shanahan's regrets was not drafting quarterback Patrick Mahomes, the man Saleh and the defense must likely stop if the Niners are to win Super Bowl LIV.

Shanahan had just been appointed the 49ers head coach prior to the 2017 NFL Draft when Mahomes came out of college and his team owned the second overall pick.

Yet Shanahan thought San Francisco could wait and acquire Kirk Cousins the following the year, so they passed on future Chiefs star Mahomes, later trading for current starter Jimmy Garoppolo.

On Mahomes, the 2018 MVP and arguably the NFL's best quarterback, Shanahan said: "I didn't look into him, obviously, as much as I should have.

He added: "There's always a risk with that when you spend a first-round pick on a quarterback.

"With the situation we were in, we didn't want to be that risky, especially with the second pick in the draft. We didn't [study Mahomes] as hard. Obviously, he ended up being one of the best players in the league, along with a couple of other quarterbacks that year. He's extremely talented." 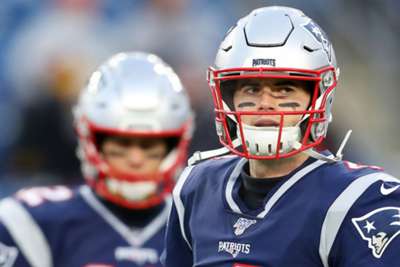