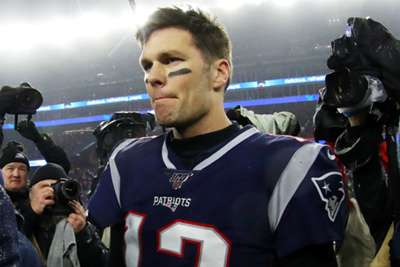 He may not be at the Super Bowl for the first time in four years, but Brady ensured he remained the focus in Miami with an uncaptioned black-and-white photo he uploaded to his social media accounts on Thursday.

Six-time Super Bowl champion Brady, who could be seen walking in the tunnel at the Patriots' stadium in the picture, is due to become a free agent this offseason and the 42-year-old has indicated he wants to carry on playing.

The possibility of him starting his 21st NFL season away from New England is therefore seemingly a realistic possibility.

The Los Angeles Chargers and Indianapolis Colts have been mooted as potential destinations for Brady.

Though when asked where he thought Brady could wind up, Ramsey added: "I don't know, the [Las Vegas] Raiders maybe."

Philadelphia Eagles wide receiver Jackson interpreted the tweet in another way, believing Brady is about to hang up his cleats after 20 glorious years with New England.

"He's walking away. He's retiring," said Jackson, who, like Ramsey, was speaking at the EA SPORTS Bowl.

New York Jets Pro Bowler Jamal Adams had implored Brady to "please leave the AFC East!", yet Jarvis Landry, who plays in the AFC North for the Cleveland Browns, feels it would be strange to see the veteran in a different jersey.

"It's not right to take the Patriots out without Tom Brady there," Landry added.

"Like, does it even count anymore? You know what I mean?

"I'm kidding. But, you know, he's a true competitor.

"I'm sure whatever decision that he makes is going to be the right one for him and he's going to make it work."