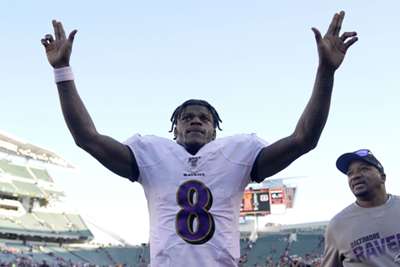 Lamar Jackson has been named the NFL's MVP for the 2019 season by unanimous vote.

He also broke Michael Vick's single-season record for rushing yards for a quarterback, amassing 1,206 yards on the ground as the Ravens went 14-2 in the regular season.

They exited the playoffs at the first hurdle, falling 28-12 against the Tennessee Titans, though Jackson still had over 500 yards total offense during that Divisional Round clash.

Jackson had all 50 first-place votes for the award. The only other MVP to win by unanimous vote was New England Patriots great Tom Brady in 2010.

Jackson started in sensational fashion, torching the Miami Dolphins for 324 passing yards and five touchdowns in a game where he had a perfect passer rating.

The 23-year-old had two other games with five touchdown passes and also had a perfect passer rating against the Cincinnati Bengals in Week 10, when the Ravens were in the midst of a 12-game winning streak.

That victorious run also helped Jackson's coach John Harbaugh win the Coach of the Year award at the NFL Honours on Saturday night.