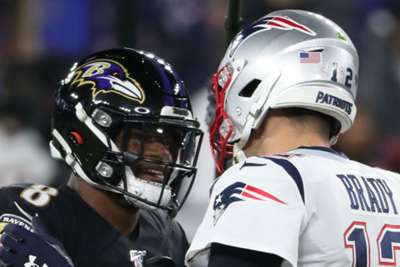 Lamar Jackson joined Tom Brady in becoming a unanimous NFL MVP on Saturday, but the Baltimore Ravens quarterback now wants to emulate his success in Super Bowls too.

Jackson was confirmed as the MVP of the 2019 NFL season in Miami having starred for the 14-2 Ravens in his first full year as the starter.

As well as breaking Michael Vick's single-season rushing record for a quarterback, Jackson also led the league in passing touchdowns with 36 scores and delivered a series of astounding plays with both his legs and arm.

That earned him all 50 first-place votes for the MVP award, making him only the second winner by unanimous vote after New England Patriots great Brady in 2010.

However, collectively Jackson's season ended in disappointment as the Ravens lost a Divisional Round clash to the Tennessee Titans, and it is Super Bowl rings – of which Brady has six – that the newly crowned MVP wants now.

Informed that he was only the second unanimous MVP winner, Jackson replied: "I'm trying to chase Brady.

"I'm not worried about any other quarterback because he's got six Super Bowls.

Reaching the pinnacle of a sport is usually a time for reflection, yet Jackson, who turned 23 last month, highlighted how he is still at the start of his NFL journey.

"I'm not really trying to dwell on what I just did. [If] I win a Super Bowl, you'll probably see a lot more emotion.

The Ravens coaching staff reaped the rewards of altering their offense to suit Jackson's unique skillset.

Their 14-2 record also earned John Harbaugh the NFL Coach of the Year award, not that he wanted to take any credit for Jackson's MVP campaign.

Instead he lauded Felicia Jones, Jackson's mother, for fighting her son's corner when others said the athletically gifted player should switch position to running back or wide receiver.

"You know who deserves the credit for Lamar? Lamar. The good lord who gave him the talent and his mum," Harbaugh added.

"I think his mum is the hero in this whole thing. His mum had his back the whole way. We raise our kids, and you want to see them do well and fight for them a little bit.

"All the way, because of the circumstances and situations of football, he wasn't supposed to be a quarterback. And his mum made sure he was a quarterback and here he is, playing at the highest level, differently."