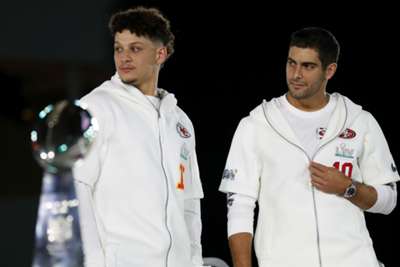 Super Bowl LIV is considered too close to call by many.

We asked current and past NFL greats for where they thought the game might be won and lost at Hard Rock Stadium in Miami on Sunday.

Hall of Fame defensive tackle John Randle: "San Francisco's front, that defensive line, is going to be putting a lot of pressure on Mahomes. If they can continue to do that, keep Patrick Mahomes from running down the field, I think they can come out with the victory."

Five-time Pro Bowl center Travis Frederick: "I think you're going to see offense, offense, offense. The 49ers defense has been so good and you have such talent on the Chiefs defense, but those offenses are both really good. I think whoever has the ball last is going to win the game."

Hall of Fame offensive lineman Bruce Matthews: "I'm a big Patrick Mahomes fan, I like the kid a lot, the way he carries himself, what he does in interviews, obviously what he does on the playing field and the way the Chiefs have responded in their two playoff games. I like the Chiefs but it's a great matchup. Kyle Shanahan, I know, will have the Niners ready to play and they're a pretty solid team on defense."

Las Vegas Raiders running back Josh Jacobs: "The 49ers are a complete team, I feel like. That defensive front is crazy, that front four, front seven. But they're going against Patty. It's never a certainty of a win when you're going against him. It's going to be a good one. I'm thinking all the time that system [the 49ers rushing attack] would be a great system to be in. I'm proud of them guys, they're making the running backs look good. They're bringing the value and love for running backs back."

Buffalo Bills head coach Sean McDermott: "If you look at the entire defensive line of the 49ers, that's real. Those guys make it hard to throw. They're going to make it hard for the Chiefs passing game, I imagine. I'm sure [Chiefs head coach] Andy Reid will have a great plan. Andy and I worked together in Philadelphia for 12 years and so expect his team to be well prepared for it. [San Francisco] will bring a lot of heat from that front four."

Pro Bowl outside linebacker Shaquil Barrett: "In order for the Niners to win, it's going to come down to their receivers other than Emmanuel Sanders and George Kittle, they’re going to have to step up and do everything. For the Chiefs to win, they need that defensive line to keep the pressure on Jimmy G [Garoppolo] and everybody to play their run gaps. If you can't stop the run, they're going to eat you alive."

Hall of Fame offensive tackle Anthony Munoz: "You've got to look at the Kansas City tackles. Those are the guys that, when I was playing and when we were going into a big game, the head coach would say, 'The hat would go on you'. We have two hats and those are going to be on the two tackles, [Eric] Fisher and [Mitchell] Schwartz, those are the guys that if we can see them do a pretty good job, you're going to see some points by the Kansas City offense."

Former San Francisco 49ers head coach Steve Mariucci: "I have loyalty with the team I used to coach for several years, the 49ers. I've got a lot of respect for that organisation. They've got five Super Bowls, looking for number six. But I also have loyalty with a friend, Andy Reid, we cut our teeth together 28 years ago with the Green Bay Packers. Friendships never die, right? So I have part of me that's really rooting for his success."