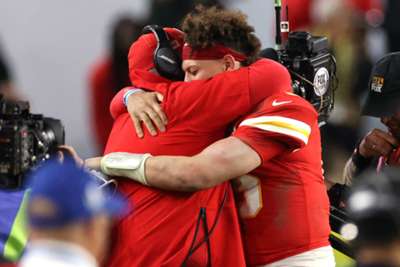 The Chiefs overturned a 10-point deficit inside the final seven minutes as Kansas City claimed their first title in 50 years with a 31-20 victory in Miami on Sunday.

Mahomes led the way for the Chiefs, crowned Super Bowl MVP thanks to his two touchdowns against the 49ers at Hard Rock Stadium.

The youngest player to be named NFL MVP and win a Super Bowl in their career at 24 years and 138 days, Mahomes – the 2018 MVP – told Fox Sports afterwards: "We never lost faith. That's the biggest thing.

"No one had their head down. We believed in each other, that's what we preached all year long. We had this guy right here [referencing Reid] to get us here.

"We had to jump in. Defense had some big stops for us and we found a way to win in the end.

"Keep firing, keep believing in your eyes and throwing it. It gives me the confidence to do what I do."

BIG RED, WE DID IT pic.twitter.com/t1v7b7l9Uz

It was also a monumental moment for Andy Reid, who finally celebrated his first Super Bowl triumph as a head coach.

Reid earned a championship ring, having first been appointed coach of the Philadelphia Eagles in 1999.

Asked if it was worth the wait, the 61-year-old said: "Absolutely, absolutely. Love this guy right here [Mahomes] and the other guys. This is what it's all about. What a great team and coaches. Appreciated every bit of it."

Reid continued: "I'm good. My heart is racing. I'm getting older. I can't let it race too much."