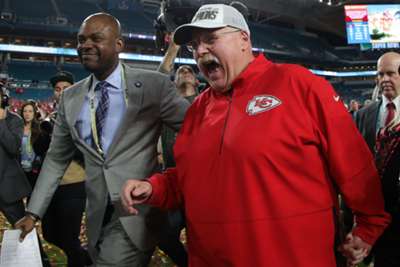 After 222 wins and 21 years as a head coach, Reid ended his drought for a Lombardi Trophy following Sunday's come-from-behind 31-20 win over the San Francisco 49ers.

Reid was the winningest coach in the NFL without a Super Bowl ring until the Chiefs overturned a 10-point deficit inside the final seven minutes against the 49ers.

Celebrating Kansas City's first Super Bowl success in 50 years, Hunt hailed Reid – who joined the Chiefs in 2013 after 14 years with the Philadelphia Eagles, where he lost to the New England Patriots in the 2005 showpiece.

BIG RED, WE DID IT pic.twitter.com/t1v7b7l9Uz

"It's a beautiful trophy and I can't think of a better conclusion to the 100th season of the NFL than receiving this trophy," Hunt said during the trophy presentation.

"I'm so happy for our players, coaches and our fans. And especially Andy Reid. Nobody deserves this trophy more than Andy Reid.

"I want to thank the lord for blessing our family with all these incredible people, who helped bring these championship home.

"To the Chiefs kingdom, you guys are world champions once again."