Browns star Garrett reinstated by NFL, keen to put helmet incident behind him 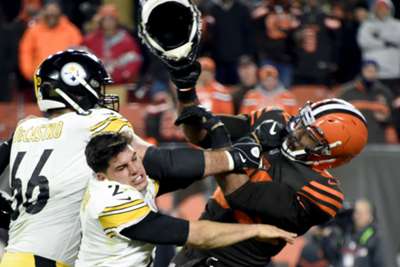 Myles Garrett has been reinstated by the NFL and has rejoined the Cleveland Browns' active roster.

Star defensive end Garrett was handed an indefinite suspension after removing quarterback Mason Rudolph's helmet and hitting him with it during the Browns' 21-7 victory over the Pittsburgh Steelers on November 14.

He missed the rest of a 2019 season that the Browns finished 6-10, a campaign that cost head coach Freddie Kitchens and general manager John Dorsey their jobs.

Garrett, the first overall pick in the 2017 draft, was told he would have to meet with the commissioner's office prior to a decision being made over his reinstatement.

After meeting with Roger Goodell on Monday in New York, Garrett will be able to link up with the team and join the Browns for offseason activities in April.

"We welcome Myles back to our organisation with open arms," said Andrew Berry, the Browns' executive vice-president of football operations and general manager.

"We know he is grateful to be reinstated, eager to put the past behind him and continue to evolve and grow as a leader. We look forward to having his strong positive presence back as a team-mate, player and person in our community."

A Pro Bowler and second-team All-Pro in 2018, Garrett has recorded 30.5 sacks in his three seasons in the league.