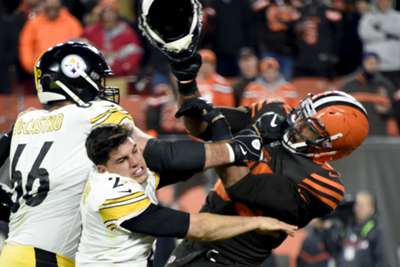 Reinstated Cleveland Browns defensive end Myles Garrett has once again alleged he was racially abused by Mason Rudolph prior to their brawl in November.

Garrett was suspended indefinitely by the NFL after he ripped off Rudolph's helmet and hit the quarterback over the head with it in the closing stages of the Browns' Week 10 victory over the Pittsburgh Steelers.

Although Garrett initially apologised for his actions, he subsequently accused Rudolph of using a racial slur, a claim that was vehemently denied by the Steelers signal-caller.

Following an investigation, an NFL spokesperson said the league found "no evidence" to support Garrett's allegation.

However, after being reinstated earlier this week, Garrett has again said that Rudolph racially abused him, telling ESPN's Outside The Lines: "He called me the N-word. He called me a 'stupid N-word'."

Garrett said he did not want his initial accusation to be made public, adding: "I didn't want to try to use it as justification for my actions because there's nothing to justify. Like, there's nothing I can say or do to justify what I did on that day. I'm not saying I didn't do anything wrong.

"I know what happened, I know what I heard. People say things when they're heated, or full of emotion. I leave it on the field. He said it, but that was three months ago, four months ago now. I leave that behind.

Following Garrett's initial allegation, Rudolph's attorney, Timothy M. Younger, told ESPN: "This false allegation was never asserted by Garrett in the aftermath of the game, never suggested prior to the hearing, and conspicuously absent in the apology published by the Browns and adopted by Garrett.

"The malicious use of this wild and unfounded allegation is an assault on Mason's integrity which is far worse than the physical assault. This is reckless and shameful. We will have no further comment."