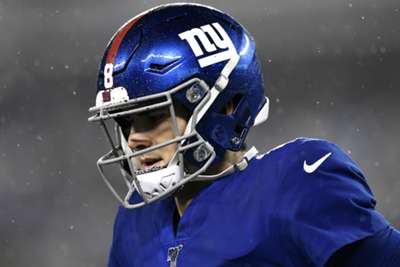 Garrett is the Giants' offensive co-ordinator after his contract as head coach of NFC East rivals the Cowboys was not renewed at the end of the last NFL season.

The 54-year-old spent nine and a half seasons as Dallas coach, a spell in which he only recorded one losing season and won three division titles, but tasted victory in just two playoff games.

Romo played in Garrett's offense until 2016, earning four Pro Bowl selections, and Jones is leaning on the Cowboys' past for the Giants.

"I have [talked with Romo] a little bit, not a ton to be honest with you," Jones, who has become the Giants' undisputed starter following Eli Manning's retirement, said on Wednesday on a conference call with reporters. "I'm sure I will as we get going."

The Giants (4-12) and the Cowboys (8-8) both missed out on the playoffs last season, finishing behind the Philadelphia Eagles in the NFC East.

Jones added: "I certainly did that, diving into some of the Cowboys stuff and what they had done in the past.

"The rules make it tough to communicate a whole lot about that stuff, so there's a little bit of patience involved in that until getting to a point where we could get the playbook and kind of understand some of the concepts and get some of the verbiage. But I did my best to be prepared for when I could get my hands on that stuff."

Giants running back Saquon Barkley is also set to lean on the Cowboys, turning to Dallas counterpart Ezekiel Elliott.

"I haven't contacted Zeke yet but it's something I do plan on doing," Barkley said. "But I kind of want to dissect and get the system down myself and then get to Zeke and see what he was doing here and what he was doing there.

"It's kind of like with anything. There [is] some basic stuff that you learn and some basics you have to be able to do, but at the end of the day there is some stuff you have to do as a football player to become great and use your creativity. And I will definitely use him to try to learn from him and see what he was able to do."