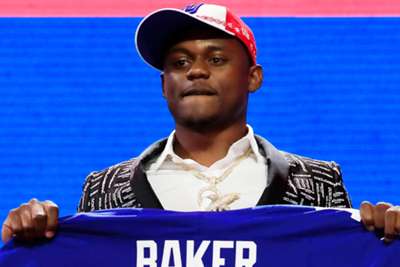 New York Giants cornerback Deandre Baker and Seattle Seahawks cornerback Quinton Dunbar turned themselves in to the Miramar Police Department in Florida on Saturday after both were charged with armed robbery.

Baker and Dunbar were issued warrants for their arrests on Thursday stemming from a May 13 incident.

The men are accused of stealing money and watches with force while armed with semi-automatic firearms. Baker allegedly intentionally threatened victims with a firearm.

Baker's lawyer, Bradford Cohen, said he has several affidavits that will clear Baker.

"We believe our client is innocent of all charges," Cohen said. "We urge people not to rush to judgment. We have affidavits from several witnesses that exonerate my client."

Confirming that Deandre Baker and Quinton Dunbar have both turned themselves in (at the Broward County jail). No additional information will be provided at this time. pic.twitter.com/AThkkkKRTx

Dunbar's attorney, Michael Grieco, said he has passed along five sworn affidavits from witnesses that exonerated his client from wrongdoing to the state attorney's office.

In other NFL news, Washington Redskins receiver Cody Latimer was arrested in Colorado on Saturday on felony charges of assault in the second degree, menacing and illegal discharge of a firearm.

According to a Douglas County Sheriff's Department report, a witness heard gunshots and arguing inside an apartment.

When the responding officers arrived, they found three individuals who were all detained. One person had minor injuries, which were not related to a gunshot.

Latimer was released on $25,000 bond and is facing misdemeanour charges of prohibited use of a weapon and reckless endangerment.