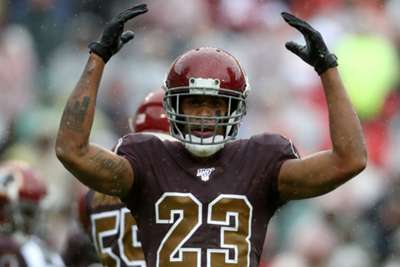 The legal representatives for Quinton Dunbar and Deandre Baker - the two NFL cornerbacks charged over an alleged armed robbery - claimed their clients have been released from jail after posting bail.

The Miramar Police Department issued arrest warrants for Seattle Seahawks corner Dunbar and New York Giants defensive back Baker over an incident that occurred in Florida last Wednesday, where money and watches were allegedly stolen.

Dunbar and Baker turned themselves in at Broward County Jail over the weekend and their respective attorneys both announced on social media that they had been released after posting bonds.

Dunbar, who was traded from the Washington Redskins to the Seahawks in March, issued a statement through his attorney Michael Grieco in which he apologised for "any unnecessary distractions".

In the statement, posted on Grieco's Twitter account, Dunbar said: "I would like to thank all my fans for their support and apologise to the Seattle Seahawks organisation for any unnecessary distractions that these allegations against me may have caused.

Statement from Quinton Dunbar upon this evening’s release from custody pic.twitter.com/RNpC0kxivs

"In addition, I am very grateful to be a part of a team that supports one another and uphold the credibility of each of its members through adverse situations.

"Moving forward, this entire situation has taught me how to not associate myself with environments that may mischaracterise my values and who I am."

The attorney for Baker, a first-round draft pick for the Giants in 2019, announced on Instagram that his client was also out on bail.

Bradford Cohen has said there are "affidavits from several witnesses that exonerate my client".