Roethlisberger shares video of himself throwing 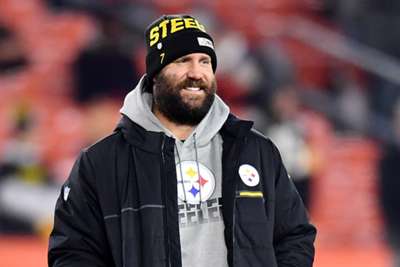 When Pittsburgh Steelers quarterback Ben Roethlisberger's 2019 season ended with elbow surgery, he vowed not to trim his beard or cut his hair until he had fully recovered.

On Monday, he shared a video proving he had earned his grooming.

Roethlisberger posted a clip to Twitter showing himself throwing to team-mates, indicating the 38-year-old has made a full recovery from the operation that ended his season in 2019.

The video begins with Roethlisberger explaining his promise to himself last year.

"I'm not going to shave or cut my hair until I can throw a football again … throw it to one of my team-mates, like a legit NFL pass," he said.

Roethlisberger is then shown firing passes at Quaker Valley High School in Leetsdale, Pennsylvania to wide receivers JuJu Smith-Schuster and Ryan Switzer, along with running back James Conner.

The video ends with Roethlisberger's hair cut and Smith-Schuster looking directly at the camera to declare: "He's back."

The beard is trimmed...

The Steelers managed an 8-8 record last season despite a series of injuries to key contributors, especially on offense.

Roethlisberger injured his throwing elbow in Week 2 in a loss to the Seattle Seahawks, while Conner missed six games and Smith-Schuster sat for four games.

Mason Rudolph was Roethlisberger's primary replacement at quarterback, playing 10 games, but undrafted rookie Devlin Hodges made six starts, including in each of the season's last five games.

Roethlisberger, a six-time Pro Bowl selection, has led the Steelers to three Super Bowl appearances and two titles in his 16 seasons with the team.

He has a career 94.0 passer rating and is Pittsburgh's all-time passing leader with 56,545 yards and 363 touchdowns.