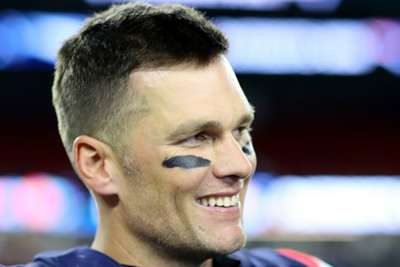 On the same day that NFL teams can start reopening their facilities amid the coronavirus pandemic if state and local governments give the go-ahead, Tampa Bay Buccaneers quarterback Tom Brady worked out with his new team-mates.

This session, though, took place on a field at a preparatory school in Tampa.

The Tampa Bay Times published pictures of Brady and several of his team-mates during a roughly two-hour throwing session at Berkeley Preparatory School on Tuesday, with Brady donning an orange practice jersey over his shoulder pads.

According to ESPN, an NFL spokesperson said the workout is allowed as long as Brady and his team-mates follow the recommendations and guidelines of state and local authorities and medical experts along with NFL Players Association guidelines.

A six-time Super Bowl champion with the New England Patriots, Brady has often been in the news since joining the Buccaneers on a two-year, $50million contract in March.

Trespassing in parks, breaking and entering... Just making myself at home in Tompa Bay!  https://t.co/zfm5q9zhz6

Brady was ejected from a closed Tampa park last month after being spotted working out. Tampa mayor Jane Castor later issued a light-hearted apology to Brady, saying: "Tom, my apologies for the miscommunication when you arrived – not the best first impression.

"But given my law enforcement background, I couldn't help but have someone investigate the sighting of a G.O.A.T running wild in one of our beautiful city parks. No harm, no foul, and thanks for being a good sport."

Brady also avoided a trespassing charge and fine from the NFL for his bungled visit to the home of Buccaneers offensive coordinator Byron Leftwich late last month.

The NFL opened an investigation into Brady visiting Leftwich's house to pick up his playbook and determined that he did not violate any offseason work rules.

Brady's visit to Leftwich’s home would have flown under the radar had he not entered Leftwich's next-door neighbour's house by mistake.