Browns QB Mayfield ready for ´big year´, but under no added pressure 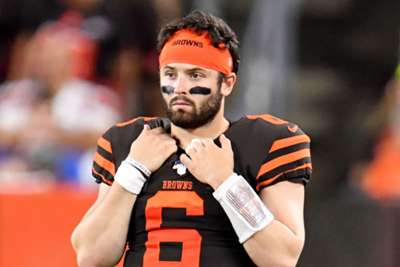 Cleveland Browns quarterback Baker Mayfield insisted he was under no added pressure as he prepares for his third season in the NFL.

Mayfield, 25, was the top pick in the 2018 NFL Draft, but has struggled during his first two campaigns.

He signed a four-year deal in 2018 and while he knows the upcoming season is important, Mayfield said there was no need for additional pressure.

"For me, it goes back to the mindset that I am comfortable and living in and that work-ethic mentality. I think that fits it," he said on Wednesday.

"That is why quarterback is one of the positions that is the hardest in sports. If I play better, our team is going to do better. I put that pressure on myself. It does not matter what year it is. I have to play better each year."

When @bakermayfield isn't working out and prepping for the season, he's keeping himself pretty busy pic.twitter.com/MYVuWl1bKz

Mayfield said the time for talking was over for Cleveland and he is happy to be "moving in silence".

"I have a different approach to this year. I think everybody who has been interviewed on our team has hit the nail on the head over and over about it, [it] is time to work. It is time to do our thing, instead of talking about it," he said.

"This is the first media thing I have done just because there is no need to be talking about it. It is just time to go do it.

"Right now, it is kind of moving in silence, which is fine with me. That is how I used to do it before getting on a bigger stage so I am happy to get back to those roots and like I said earlier, get back to the fundamentals to where I can accomplish the goals when the season comes around."