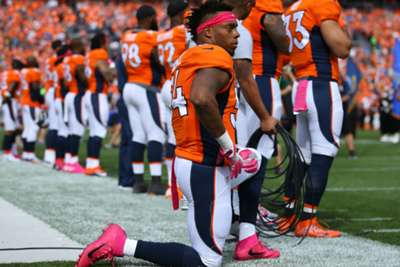 Former Denver Broncos linebacker Brandon Marshall recalled kneeling alongside Colin Kaepernick in 2016, insisting "this is what we were talking about then" amid protests over George Floyd's death.

Kaepernick has been out of the NFL since the end of the 2016 season, during which the ex-San Francisco 49ers quarterback attracted controversy by kneeling for the USA national anthem in protest against racial injustice and police brutality.

Marshall also kneeled before games during the 2016 season and the 30-year-old Super Bowl 50 champion told TMZ: "Back then, we were called rogues, people said that we didn't deserve jobs, but this is what we were talking about then.

"I think people are looking at [Kaepernick] now like, OK, maybe he knew. People didn't want to hear the message after 'oh they were kneeling' they didn't want that message, weren't ready for it, didn't listen.

"I hope, and I look at it, I hope people are ready for the message, I really hope they're ready for change.''

Marshall – who played for the Broncos between 2013 and 2018 – said he has spoken to Kaepernick following Floyd's death, adding: "We talked some about what's happened - and this is why he started the Know Your Rights foundation - and I asked him if he needed me to do anything, or what I could do to help.

"He said right now, at the moment, he's concentrating on legal assistance for the protesters, but we'll talk more moving forward.''