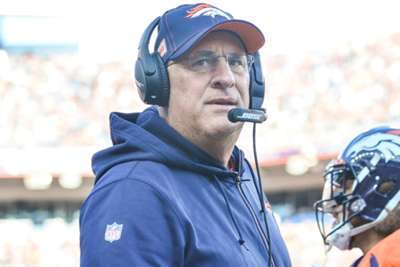 Denver Broncos head coach Vic Fangio does not believe racism and discrimination are prevalent in the NFL, calling George Floyd's death a "societal issue that we all have to join in to correct".

Speaking to reporters on Tuesday, Fangio – who was appointed Broncos coach in 2019 having previously worked for the Chicago Bears, San Francisco 49ers, Baltimore Ravens, Houston Texans, Indianapolis Colts, Carolina Panthers and New Orleans Saints – said: "I think our problems in the NFL along those lines are minimal.

There is no place for racism or discrimination of any kind.

The Broncos share in the outrage & concern over these senseless deaths.

We have an opportunity to be part of the healing process.

"We're a league of meritocracy, you earn what you get, you get what you earn. I don't see racism at all in the NFL, I don't see discrimination in the NFL.

"We all live together, joined as one, for one common goal, and we all intermingle and mix tremendously. If society reflected an NFL team, we'd all be great."

The 61-year-old American added: "I was shocked, sad and angry when I saw what the policeman do to a handcuffed George Floyd on his stomach that led to his death.

"He should be punished to the full extent of the law of the crimes he was charged with in addition to being charged with treason for failing to uphold the badge and uniform he was entrusted with ... It's a societal issue that we all have to join in to correct.''