Packers star Rodgers: It´s never been about the anthem or flag 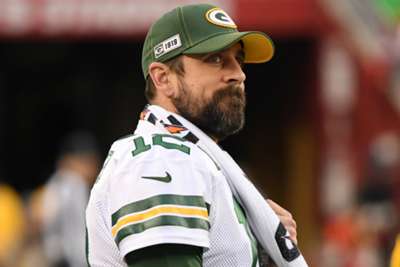 Aaron Rodgers said it has "never been about an anthem or flag" as the Green Bay Packers star called for solidarity and change amid protests over George Floyd's death.

The situation has turned attention back to Colin Kaepernick and kneeling during the national anthem in 2016 to protest against police brutality and racial inequality, which New Orleans Saints quarterback Drew Brees still does not approve of – a statement that sparked backlash on Wednesday.

A few years ago we were criticized for locking arms in solidarity before the game. It has NEVER been about an anthem or a flag. Not then. Not now. Listen with an open heart, let’s educate ourselves, and then turn word and thought into action. #wakeupamerica #itstimeforchange #loveoverfear #solidarity #libertyandjusticeforall #all

"A few years ago we were criticised for locking arms in solidarity before the game," the two-time MVP wrote on Instagram, posting a picture of himself locking arms with team-mates before a game.

"It has NEVER been about an anthem or a flag. Not then. Not now. Listen with an open heart, let's educate ourselves, and then turn word and thought into action #wakeupamerica #itstimeforchange #loveoverfear #solidarity #libertyandjusticeforall #all."

Midweek, Saints star Brees angered his team-mate Michael Thomas and other athletes after taking offence to kneeling in front of the USA flag during the anthem.

"I will never agree with anybody disrespecting the flag of the United States of America or our country," Brees said when asked about players kneeling in an interview with Yahoo Finance.

"Let me just tell what I see or what I feel when the national anthem is played and when I look at the flag of the United States.

"I envision my two grandfathers, who fought for this country during World War II, one in the Army and one in the Marine Corp. Both risking their lives to protect our country and to try to make our country and this world a better place. So every time I stand with my hand over my heart looking at that flag and singing the national anthem, that's what I think about."