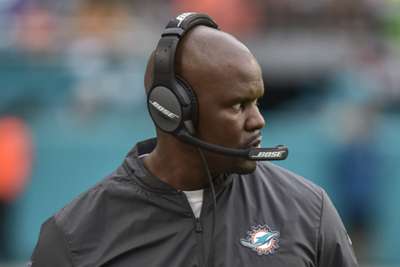 Miami Dolphins coach Brian Flores said he fully supports his players engaging in demonstrations to protest racial injustice, but urged them to be careful when doing so.

The recent wave of violence and unrest in the United States has affected Flores, one of three current African-American head coaches in the NFL, on a personal level.

He was close friends with former Indiana football player Chris Beaty, who was fatally shot on Saturday night in Indianapolis during a rally protesting against the death of George Floyd while in police custody in Minneapolis.

"I've had a lot of conversations with players over the last few days. I support those guys," the second-year head coach said on Thursday during a video conference.

"I understand the emotion, what they're going through. But at the same time, I want them to be smart. I care about each one of those guys. I had a situation hit home pretty closely for me, so there's some fear on my end, to be honest with you."

Speaking about Beaty, who played with Dolphins assistant Lance Bennett at Indiana, Flores added: "This guy was an incredible human being. It's sad. It's just another tragedy that we're dealing with.

"Hopefully we can learn from it and make the necessary changes so these things don't happen again."

Flores acknowledged it has been challenging for the coaching staff to have the players focused on football, while also realising the need for an outlet to express their frustrations - especially during an offseason where meetings and workouts have needed to be conducted virtually.

"That's been a kind of place to get away for a little bit. But, yeah, our hearts and minds are with the Floyd family and the [Ahmaud] Arbery family and Breonna Taylor. It seems like we have to share our condolences.

"These guys, they have my support. I know it's an emotional time."