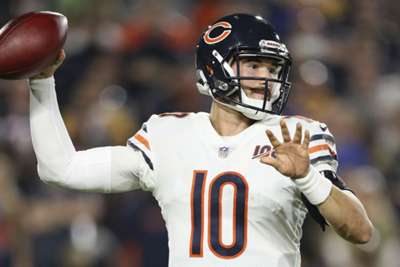 Chicago Bears quarterback Mitchell Trubisky said he initially was not happy when the team brought in Nick Foles, but has since embraced the idea of competition.

Trubisky's comments on a conference call with reporters on Friday were his first since the Bears traded a fourth-round draft pick to the Jacksonville Jaguars for fellow quarterback Foles.

"I was kind of p****d off, in a good way. I've been motivated ever since,” Trubisky said. "It's a business decision. I'm all for the Bears getting better and winning games."

The Bears traded up one slot in the 2017 draft to select Trubisky second overall out of North Carolina, though he struggled in 12 games during his rookie season.

There was also regression last year in nearly every statistical category after a promising Pro Bowl campaign in 2018.

"I'm very confident about where I'm at right now and what I can do for this team," Trubisky said.

“I feel like I'm in a good mental space. I'm motivated and driven to do more than I did last year. I'm very locked into what I've got to do."

After a playoff appearance in 2018, Chicago squandered a 3-1 start last season to finish 8-8. The Bears' offense ranked 29th in scoring, averaging 17.5 points per game.

"I've been motivated since our season ended last year. It didn't end the way we wanted it to, and we left a lot out there," Trubisky admitted. "It had to do with health and lack of details on offense.

"We need to get back to the playoffs. And we need to have a different mentality then we did last year. We let a lot of details slip and we didn’t play the way we should have been playing. We lost a lot of games we should have won."

While Bears coach Matt Nagy has yet to name a starting quarterback for Week 1, Trubisky's fourth campaign will be pivotal in terms of his NFL career. Chicago declined his fifth-year rookie contract option, making him a free agent at the end of this season.

"All I can do is control what I can control," he said. "That's go out and have a hell of a year with my team-mates."