Texans coach O´Brien says he will kneel with players 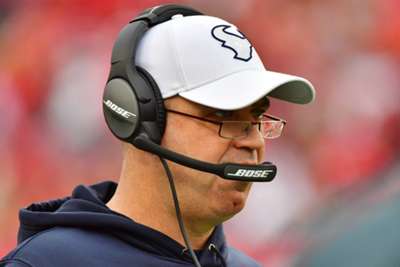 Houston Texans head coach Bill O'Brien said he will take a knee with players during the national anthem this NFL season to protest racial inequality and police brutality.

There have been nationwide protests in the United States after Floyd – an African-American man – died in police custody in Minneapolis on May 25.

A police officer was filmed kneeling on Floyd's neck during an arrest after he was crying out for help as he was handcuffed and pinned to the ground.

Former San Francisco 49ers quarterback Colin Kaepernick was the first player to kneel during the anthem in protest against racial injustice in 2016, before he was released the following year.

New Orleans Saints star Drew Brees said players who knelt during the anthem were "disrespecting the flag", comments which sparked fierce backlash and led to an apology, while US president Donald Trump insisted kneeling is "disrespecting" the country.

But O'Brien told the Houston Chronicle: "Yeah, I'll take a knee. I'm all for it. The players have a right to protest, a right to be heard and a right to be who they are.

The city of Houston mourns today.

O'Brien has been a supportive presence during the recent social justice fight.

He cancelled virtual team activities on June 9 and instead encouraged players to attend the funeral service for Floyd.

"It wasn't a conscious effort, O'Brien said on the team's response to Floyd's death. "It wasn't like we had a conversation together and decided to do it.

"I think we just said enough is enough, and we've got to do what's right. As an organisation, we're part of the conversation and we want to do our part."