Baker Mayfield says he will kneel for anthem 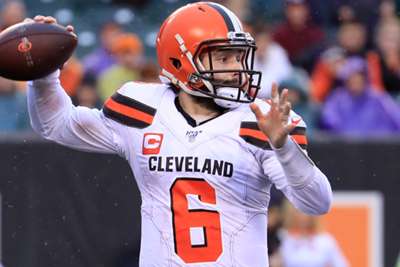 Cleveland Browns quarterback Baker Mayfield said on social media that he "absolutely" will be kneeling during the national anthem in the upcoming NFL season.

Mayfield posted a video to his Instagram account of himself working out in a one-on-one session with a trainer on Friday, and a fan commented: "Please tell Browns fans you're not going to be kneeling this season."

Mayfield responded: "Pull your head out. I absolutely am."

The response by the Browns' third-year quarterback, who is white, sparked hundreds of comments, some supporting Mayfield but many denouncing kneeling protests as disrespectful to the United States military and the American flag.

"The ignorance in this response says it all," Mayfield said after reading many of the replies. "It's more than just the flag. It's about our country and everyone being treated as equals.

"I have the utmost respect for our military and people that serve for our freedom."

The practice of kneeling during the national anthem was started by then-San Francisco 49ers quarterback Colin Kaepernick, who knelt to protest police brutality and racial oppression in 2016. Kaepernick has not played in the NFL since that season.

While the debate about anthem protests had nearly died out over the past few years, the issue has been reignited by the protests against police brutality following the death of George Floyd in Minneapolis.

Floyd, who was black, was killed while in the custody of white police officer Derek Chauvin on May 25 when Chauvin pressed his knee against Floyd's neck for nearly nine minutes.

Mayfield's comment comes after Seattle Seahawks coach Pete Carroll said this week that he regrets not signing Kaepernick in the 2017 offseason.

Houston Texans star defensive end J.J. Watt was also confronted on social media about kneeling during the upcoming season. Watt supported the practice but was not clear whether or not he will take part.

A Twitter user tagged Watt in a reply on Friday, saying: "Pretty sure you won't see [Watt] taking a knee."

Watt replied on Saturday: "A) Don't speak for me. B) If you still think it's about disrespecting the flag or our military, you clearly haven't been listening."