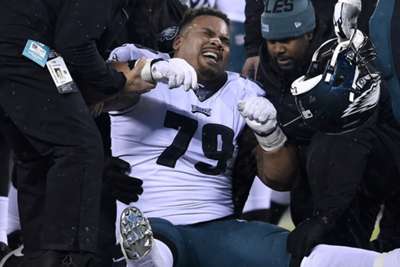 Brooks revealed the news via Twitter on Monday after reportedly hurting his Achilles while working out at Philadelphia's training complex.

A Pro Bowl selection in each of the past three seasons, Brooks has been rehabbing from a dislocated shoulder he sustained against the New York Giants in week 17 of last season, forcing him to miss the Eagles' wild-card loss to the Seattle Seahawks in January.

"So I guess now that the news is out yes I tore my other Achilles but when life makes you lemons you make lemonade," the 30-year-old wrote.

"I'll be back and better than ever. Appreciate the love."

So I guess now that news is out yes I tore my other Achilles but when life gives you lemons you make lemonade. I’ll be back and better than ever. Appreciate the love

The seven-year veteran previously tore his right Achilles tendon during the Eagles' loss to the New Orleans Saints in the 2018 playoffs.

Brooks, though, returned in time for the 2019 campaign and started all 16 regular-season games before missing Philadelphia's opening-round playoff loss to the Seahawks due to his shoulder injury.

Including the postseason, Brooks has still started 67 of a possible 70 games since signing a five-year contract with the Eagles prior to the 2016 campaign.

The Eagles did select Andre Dillard in the first round of the 2019 draft as an intended replacement for the 38-year-old Peters and took a pair of Auburn offensive linemen – Jack Driscoll (fourth round) and Prince Tega Wanogho (sixth round) in this year's draft.