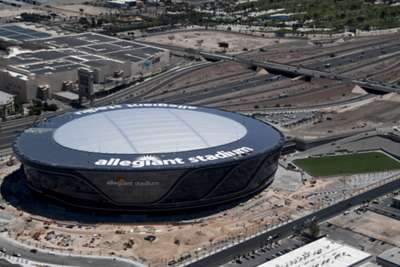 Las Vegas has yet to host an NFL game, but the city has proved it is up to the task to hold a celebration.

The NFL announced on Tuesday that Las Vegas will host the 2021 Pro Bowl at the Raiders' new Allegiant Stadium home on January 31.

"We look forward to partnering with the Raiders and the Las Vegas Convention and Visitors Authority [LVCVA] to bring the excitement of Pro Bowl week to our Las Vegas fans and community for the first time," Peter O'Reilly, NFL EVP of club business and league events, said in a statement.

This will be the first season the Raiders play in Las Vegas, and the NFL had scheduled this year's draft to take place on the Las Vegas Strip until the coronavirus pandemic forced it to be held remotely.

While Las Vegas was not able to host the draft festivities this year, during the broadcast of April’s first round, Roger Goodell announced that the city has been awarded the 2022 draft, with the commissioner saying: "We think you deserve another shot."

Las Vegas will now become the 11th host of the Pro Bowl since 1950, after Orlando, Florida had the last four.

"The Raiders welcome the NFL Pro Bowl to Allegiant Stadium and to Las Vegas, the Sports and Entertainment Capital of the World," Raiders president Marc Badain said.

"Pro Bowl week is a celebration of the best the NFL has to offer and there is no better place than Las Vegas to celebrate and honour the league's biggest stars.

"The NFL, the LVCVA and the Raiders look forward to a world-class event that will set the standard for future NFL events in Las Vegas."