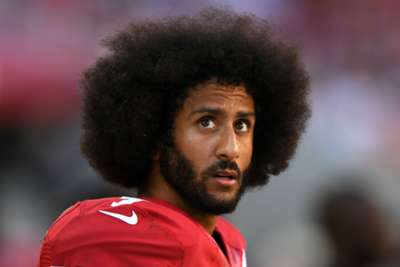 The Chargers are happy with their three current options at the position in Justin Herbert, Tyrod Taylor and Easton Stick but do have Kaepernick, 32, on a workout list.

Lynn feels fellow NFL teams would be "crazy" if they did not have him listed as one of their own options as a potential signing.

Kaepernick has been out of the league since the end of the 2016 season, during which he attracted controversy by kneeling for the United States national anthem in protest against racial injustice and police brutality.

He was involved a workout for teams in November last year and his cause has received renewed attention amid nationwide protests after the death of George Floyd in police custody on May 25.

"It would be crazy to not have him on your workout list," Lynn told reporters.

"I haven't spoken with Colin, not sure where he is at as far as his career [goes], what he wants to do, but Colin definitely fits the style of quarterback for the system that we are going to be running.

"I'm very confident and happy with the three quarterbacks that I have but you can never have too many people waiting on the runway."

Now more than ever, we are one team. #PlayInside #PlayForTheWorld #StaySafe

Kaepernick filed a grievance against the NFL in 2017, accusing owners of colluding to keep him out of a job, a case which was settled in February.

Following his apology to players for the league's previous stance on protests, commissioner Roger Goodell this week said he is encouraging teams to sign the former San Francisco 49ers QB.