Rams, Chargers to feature on new season of Hard Knocks 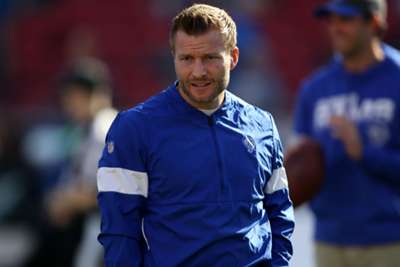 HBO's Hard Knocks show will have co-headliners for the first time, as the network and NFL Films announced on Thursday they will include both Los Angeles franchises for this year's training camp docuseries.

'Hard Knocks: Los Angeles' will focus on both the Rams and Chargers as each prepare for their first seasons as co-tenants in the brand-new SoFi Stadium in nearby Inglewood. The five-episode series will debut Aug. 11.

"We are looking forward to having Hard Knocks in our camp this year," Rams coach Sean McVay said.

"Hard Knocks always offers a rare opportunity for our fans to see our players' hard work to prepare for the season, as well as gives them a peek behind the curtain to observe these guys off the field, too.

"This year will be special because the show will also get an unprecedented look at SoFi Stadium, (Rams owner) Stan Kroenke's vision for professional football in L.A."

The Rams were previously featured on the show in 2016, the first year of their return to Los Angeles after a 21-year run in St. Louis.

They will join the Dallas Cowboys (2002, 2007) and Cincinnati Bengals (2009, 2013) as the only teams to appear twice on Hard Knocks, which HBO has aired every summer since 2001 but has chronicled only one team in prior seasons.

Welcome back to Los Angeles, #HardKnocks

HBO also announced it has extended its agreement with NFL Media and NFL Films to produce the series in future years.

"NFL Films cherishes the relationship we've had with HBO for over four decades, and specifically with the Hard Knocks franchise since 2001," NFL Films senior executive Ross Ketover said.

"To be able to announce this extension as we embark on an unprecedented two-team series this summer brings us incredible pride and only heightens our excitement for the return of football."

The Chargers will also be ushering a new era in multiple ways, having parted with longtime quarterback Philip Rivers during the offseason and selecting Oregon signal-caller Justin Herbert in the first round of this year's draft. The Rams, meanwhile, will be attempting to bounce back from a disappointing 9-7 campaign in 2019 after reaching the Super Bowl the previous season.

The two Los Angeles teams are based around 80 miles apart, with the Chargers located in Costa Mesa and the Rams in Thousand Oaks.

The NFL has mandated that teams hold their training camps at their own facilities this year for health and safety reasons related to the coronavirus pandemic.