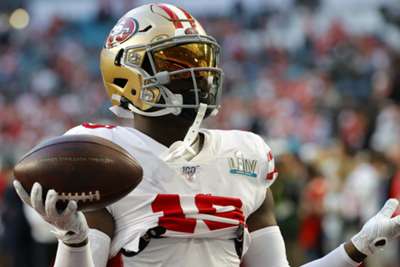 The San Francisco 49ers will hope to have one of their top playmakers fit for the start of the regular season after wide receiver Deebo Samuel broke his foot while working out with a team-mate.

NFL Network Insider Ian Rapoport reported that Samuel suffered a Jones fracture and is expected to be out for between three and four months. A 12-week recovery puts his return in the first few weeks of the season.

The team later confirmed the receiver underwent surgery on his left foot on Thursday. While they did not indicate a timescale for his return, Samuel tweeted: "10 weeks I'm back better than the Deebo you seen before".

A rookie in 2019, Samuel was second on the 49ers in receptions and receiving yards, finishing with 57 catches for 802 yards, and caught three touchdown passes.

In the playoffs, the 24-year-old emerged as Jimmy Garoppolo's favorite target with team highs of 10 receptions and 127 yards.

He had five catches for 39 yards in the 49ers' Super Bowl loss to the Kansas City Chiefs in Miami.