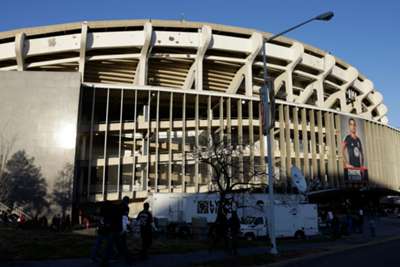 On the day the United States commemorated the liberation of slaves following the American civil war, statues of two former owners of prominent professional sports teams were taken down due to previous acts of racial injustice.

The Minnesota Twins removed a monument of Calvin Griffin from the grounds of their home stadium of Target Field as a response to insensitive remarks he made about African-Americans during a speech in 1978. In the nation's capital, Washington officials ordered the removal of a statue of George Preston Marshall that stood outside the Redskins' former home of RFK Stadium.

Marshall had a long-standing policy of refusing to sign black players for the majority of his ownership of the Redskins, which lasted from the franchise's inception in Boston in 1932 until his death in 1969. The Redskins did not sign a black player until 1962 after being pressured by both the city and national government.

"We believe that injustice and inequality of all forms is reprehensible and we are firmly committed to confronting unequal treatment and working together toward healing our city and country," Events DC, the convention and sports authority for the District of Columbia, said in a statement. "Removing this statue is a small and and overdue step on the road to lasting equality and justice.

"Allowing the memorial to remain on the RFK campus goes against Events DC's values of inclusion and equality and is a disturbing symbol to many in the city we serve."

The Marshall monument had previously been vandalised by protesters advocating the Redskins change the team name, viewed by many as disparaging towards Native Americans.

Griffith, who moved the Washington Senators to Minnesota in 1961 and remained the Twins' principal owner until 1984, was quoted by the Minneapolis Tribune as saying he relocated the franchise "when I found out you only had 15,000 blacks here." The comments were made during a speech at a Lions club event in Waseca, Minnesota in 1978.

The #MNTwins removed the Calvin Griffith statue from Target Field this morning. pic.twitter.com/K044WNP7Ys

"While we acknowledge the prominent role Calvin Griffith played in our history, we cannot remain silent and continue ignoring the racist comments he made in Waseca in 1978," the Twins said in a statement. "His disparaging words displayed a blatant intolerance and disregard for the Black community that are the antithesis of what the Minnesota Twins stand for and value.

"Our decision to memorialise Calvin Griffith with a statue reflects an ignorance on our part of systemic racism present in 1978, 2010 and today. We apologise for our failure to adequately recognise how the statue was viewed and the pain it caused for many people - both inside the Twins organisation and across Twins territory. We cannot remove Calvin Griffith from the history of the Minnesota Twins, but we believe removal of this statue is an important and necessary step in our ongoing commitment to provide a Target Field experience where every fan and employee feels safe and welcome."

The Twins' actions come amid still-heightened tensions in the Twin Cities following George Floyd's death while in custody of Minneapolis police last month, and took place on Juneteenth - a holiday commemorating the day the U.S. government publicly declared slaves to be free on June 19, 1865.