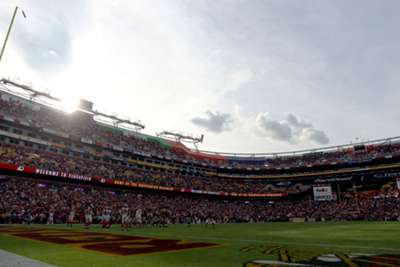 The Washington Redskins continue to distance themselves from former owner George Preston Marshall, now removing his name from their Ring of Fame.

The decision on Wednesday to get rid of the name of the known racist from inside the Redskins' stadium of FedEx Field in Landover, Maryland, as well as the history wall at the team's training facility in Ashburn, Virginia, comes four days after a section of seating that bore Marshall's name at FedEx Field was renamed after late Hall of Famer Bobby Mitchell, the franchise’s first Black player.

A day before that name change at FedEx Field, Washington officials ordered the removal of a statue of Marshall that stood outside the Redskins' one-time home of RFK Stadium.

Marshall had a long-standing policy of refusing to sign black players for the majority of his ownership of the Redskins, which lasted from the franchise's inception in Boston in 1932 until his death in 1969. The Redskins did not sign a black player until 1962 after being pressured by both the city and national government.

"We believe that injustice and inequality of all forms is reprehensible and we are firmly committed to confronting unequal treatment and working together toward healing our city and country," Events DC, the convention and sports authority for the District of Columbia, said in a statement last week.

"Removing this statue is a small and an overdue step on the road to lasting equality and justice."