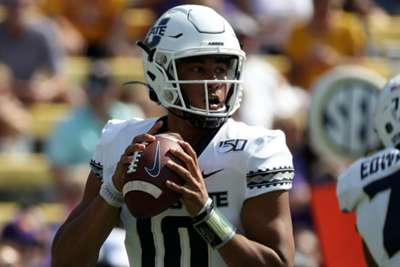 According to a report from NFL Network's Mike Garafolo, Love has agreed terms on a four-year, fully guaranteed $12.38million deal with a $6.56million signing bonus.

The Packers pulled off a shock back in April's NFL Draft when they traded up four spots to acquire Utah State's Love.

Two-time MVP Aaron Rodgers led Green Bay to the NFC Championship Game last season and remains under contract for the next four years.

However, by selecting Love, the Packers showed they are looking to the future, even if the rookie is unlikely to start for the next couple of seasons, barring an injury to 36-year-old Rodgers.

As well as getting Rodgers under contract, Green Bay also agreed to terms with running back AJ Dillon, their second-round pick in this year's draft.