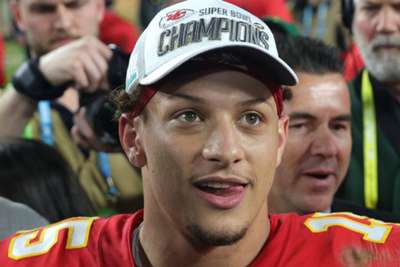 The Kansas City Chiefs signed star quarterback Patrick Mahomes to a record 10-year contract extension that will keep the reigning Super Bowl MVP under team control through the 2031 season.

Financial terms were not disclosed, though NFL.com reported the mega-deal to be worth $503million and includes $477m in guaranteed mechanisms.

The contract is the largest in North American professional sports history, surpassing the 12-year, $426.5m deal Mike Trout signed with the Los Angeles Angels of Anaheim in 2019.

Mahomes – the 2018 NFL MVP – had two years remaining on the rookie contract he signed after being taken by Kansas City with the 10th overall pick of the 2017 draft.

"This is a significant moment for our franchise and for the Chiefs Kingdom," Chiefs chairman and CEO Clark Hunt said in a team statement. "Since he joined the Chiefs just a few years ago, Patrick has developed into one of the most prolific athletes in all of sports.

"With his dynamic play and infectious personality, he is one of the most recognised and beloved figures to put on the Chiefs uniform.

"He's an extraordinary leader and a credit to the Kansas City community, and I'm delighted that he will be a member of the Chiefs for many years to come."

We have signed QB Patrick Mahomes to a 10 year extension. Mahomes secured with Chiefs for the next 12 seasons. pic.twitter.com/ZsADdVkvxZ

After sitting behind veteran Alex Smith as a rookie in 2017, Mahomes took the NFL by storm the following year in his first season as a starter.

The Texas Tech product threw for 5,097 yards and 50 touchdowns, tied for the second-most in a single season in league history, while leading the Chiefs to a 12-4 record and earning NFL MVP honours. He joined Peyton Manning (2013) as the only players with 5,000 passing yards and 50 touchdown passes in a season.

Mahomes followed up by leading the Chiefs to their first NFL championship in 50 years with a 31-20 come-from-behind victory over the San Francisco 49ers in Super Bowl LIV in February.

The 24-year-old threw two touchdown passes in the fourth quarter as Kansas City scored 21 unanswered points to overturn a 20-10 deficit, and was selected as the youngest MVP in Super Bowl history.

"I've had the privilege of coaching a lot of incredible athletes and special people in my career, and Patrick is without question on that list of players," Chiefs head coach Andy Reid said. "The best part is he's still early in his career.

"He makes us all better as an organization and we are blessed he's going to be our quarterback for years to come."

Mahomes, who is 24-7 as a starter in regular-season games and 4-1 in the postseason, currently owns league records for passer rating (108.9) and passing yards per game (302.4) among quarterbacks with at least 25 career starts.