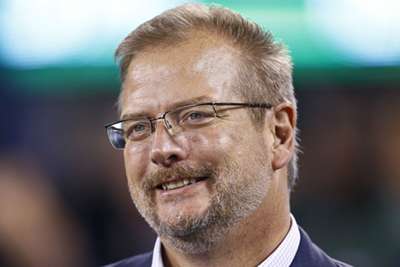 The New York Jets have fired general manager Mike Maccagnan in a shock move and promoted head coach Adam Gase to serve in the role on an interim basis.

In an announcement on Wednesday, the Jets said they would start looking for a new GM immediately, with reports suggesting the Philadelphia Eagles executive Joe Douglas is an early candidate, given his close relationship with Gase.

Maccagnan, who had two years left on his contract and served in the role since January 2015, was instrumental in the team drafting quarterback Sam Darnold last year and was part of the group involved in hiring former Miami Dolphins coach Gase in January after Todd Bowles was fired.

As well as Darnold, he also made impressive draft picks in Leonard Williams and Jamal Adams, while he selected Quinnen Williams at number three overall this year to complement a free-agency haul that included the addition of Le'Veon Bell.

However, he also picked QB Christian Hackenberg, who is no longer in the league, in the second round of the 2016 draft, and was also responsible for Bowles' hiring. The team did not reach the playoffs during his tenure.

Brian Heimerdinger, who previously worked with Maccagnan in the Houston Texans front office and had been with the Jets for just one season as the VP of player personnel, has also reportedly been fired.

Reports of a rift between Maccagnan and Gase around the draft period had previously been emphatically denied by both men, including as recently as last week.

"Mike helped to execute the strategic vision of the organisation during the last four seasons and especially the past few months," chairman and CEO Christopher Johnson said in a statement.

"However, I came to the decision to make a change after much thought and a careful assessment of what would be in the best long-term interests of the New York Jets.

"I will start a search for our new general manager immediately. In the interim, Coach Gase will be the acting general manager. I would like to thank Mike for his time and efforts during his tenure, and I wish only the best for him and his wife Betty."