Saints´ Thomas on record-breaking deal: ´I´m trying to earn every penny of it´ 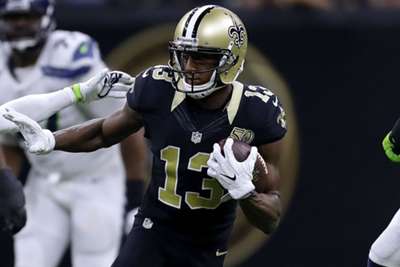 New Orleans Saints wide receiver Michael Thomas is determined to do everything he can to prove he earned his record-breaking contract extension.

Thomas signed a five-year, $100million contract extension with the Saints, giving him the highest average sally of any receiver in the NFL.

After his big deal, Thomas ended his six-day holdout and reported to training camp for the Saints on Thursday.

"Now you're the highest paid, and now you gotta go earn it," Thomas told reporters. "So that's the biggest thing I'm trying to do. I'm trying to earn every penny of it.

"I had to control what I could control. ... But just being a competitor and wanting to be the best, I feel like if you set high goals and you attack 'em, there's rewards at the end of it."

"I'm trying to earn every penny of it." - @Cantguardmike pic.twitter.com/R1u6frissu

Thomas explained he followed his agent's "coaching" through the negotiating process, who advised him to hold out until he received a deal he was happy with.

The two-time Pro Bowler also said it did not bother him that other top receivers (like Julio Jones, Amari Cooper, A.J. Green and Tyreek Hill) are waiting for their extensions, which could raise the salary limit even higher.

Even though he was not practicing with his team, Thomas said he was still training just as hard in San Diego.

"Missing those reps, not competing against my team-mates ... that's part of developing into a great player," Thomas said. "And you can't do that sitting at home."

Saints head coach Sean Payton said it was good to have Thomas back on the field, while quarterback Drew Brees explained the 26-year-old's presence added a different element to practice.

"It's awesome, great to have him back. Knew it was only a matter of time, right?" Brees said. "So I think the timing's good, get him back in the fold. I think we're still at the beginning of our install for the most part. And he came in here today as if he's been here the whole time. So all good.

"You know that this is the part of the business at times, and you hope it doesn't drag on too long. You want to have all the guys here, all the members of the team. You want the whole band, right?"

Thomas has totalled 321 catches for 3,787 yards and 23 touchdowns over his first three seasons in the league. He had an NFL-best 125 catches for 1,405 receiving yards and nine touchdowns last season.