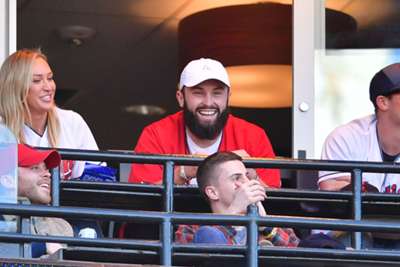 Baker Mayfield may be in training camp for the upcoming NFL campaign, but that did not stop the Cleveland Browns quarterback shotgunning a beer at a baseball game on Saturday.

Mayfield was in attendance as the Cleveland Indians took on the Los Angeles Angels in MLB at Progressive Field and made the most of his time on the big screen when cameras homed in on him.

The 24-year-old was thrown a beer and made light work of busting open the can before downing it in one.

The crowd expressed their delight and Mayfield riled them up further by exhibiting his Francisco Lindor jersey, with the Indians going on seal a 7-2 win.

"I just don’t like the idea of my franchise quarterback spending time at a baseball game. I mean, what are you doing, @bakermayfield? You don’t see guys like Aaron Rodgers shotgunning beers. Just not a good look. Go watch some film." - @ColinCowherd (probably)