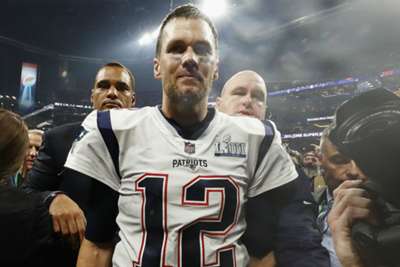 Tom Brady may have just signed a new contract with the New England Patriots, but the veteran quarterback knows he is in a "unique situation" with the NFL Super Bowl champions.

Patriots quarterback Brady will receive an $8million salary increase this season, a raise from $15m to $23m.

However, anything beyond that is still up in the air considering Brady is entering his third decade in the NFL at the age of 42.

"It's a unique situation I'm in ... my 20th year with the same team, 42 years old, so, pretty much uncharted territory I think for everybody," Brady told media on Monday.

"Im going to go out there and do the best I can this year and see what happens. ...

"The focus is this year and what we've got to do. That's where I'm focused. That's all that really matters in the end. That's what this team expects of me, to put everything into it, like I always have and I'm really excited for the year."

Brady – a six-time Super Bowl champions – seems unconcerned about any future decisions that will need to be made.

"I'm really not worried about it. I'm secure for this year, I think," he said. "At least I get a few first team reps out there. I just go out there and try to do the best I can. … There's a lot of guys who have one year left on their contract. I've got one year to go and we'll see what happens."

The new deal is a two-year extension through the 2021 season but, according to an ESPN report, the 2020 and 2021 seasons are void years.

"It's really the reality for most guys in the NFL," Brady said. "I don't want anyone to think I'm any different from everyone else. Football is a tough business. It's a production business. I'm ready to go this year, and that's really what matters and that's where my focus is."