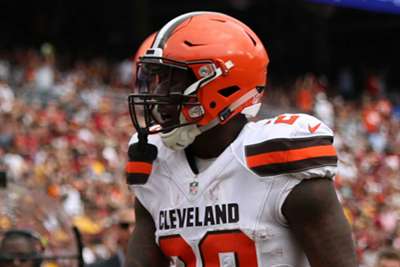 Cleveland Browns have traded Duke Johnson to the Houston Texans, it was confirmed on Thursday.

The Browns will receive a conditional fourth-round pick in the 2020 draft that could become a third-round choice, NFL.com have reported.

However, the running back became frustrated with the Browns after they added the suspended Kareem Hunt this off-season and had demanded a trade that Cleveland's front office had steadfastly refused to make, even as Johnson fired his previous agent and hired Drew Rosenhaus in an effort to engineer a deal.

Instead, Johnson is headed to Houston, where he steps into a backfield situation in which the Texans have this week waived former first-round pick D'Onta Foreman and appear to be sorting out who'll complement Lamar Miller, who had a combined 1,136 yards from scrimmage (973 rushing yards, 163 receiving yards) and six touchdowns in 14 games in 2018 to earn a berth in the Pro Bowl.

Johnson signed a three-year, $15.61million extension before the 2018 season that runs through to the 2021 season.