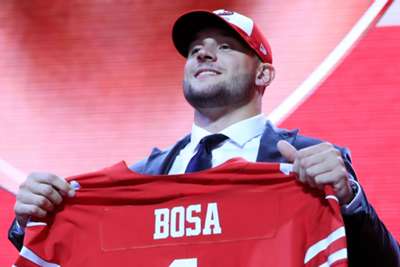 Preseason is officially here with 11 games kicking off on Thursday, and another five taking place across Friday and Saturday.

With that comes a variety of storylines which we are keeping track of as the regular season approaches.

From injury updates to the latest trade news, we take a look at what is happening around the league in this edition of NFL news and notes.

San Francisco 49ers' Nick Bosa left Wednesday's practice early with an injury, and general manager John Lynch confirmed on Thursday that the defensive end has a "significant" ankle sprain and will be forced to miss the preseason.

There is still hope he will be ready for the regular-season opener against the Tampa Bay Buccaneers on September 8, but the 49ers are going to be "very prudent" about his return.

While an ankle sprain may not seem like a huge deal, Bosa has a long history of injuries. He was sidelined for most of last season with a core muscle injury while playing for Ohio State, and missed much of the 49ers' off-season programme due to a hamstring issue.

"We don't feel he is injury prone," Lynch told KNBR. "Yesterday, he had a big human being fall on his legs while he was engaged with someone else. So, some of those things, that's football, you can't prevent that."

The Cleveland Browns are still making changes to their offense, and have sent disgruntled running back Duke Johnson to the Houston Texans in exchange for a draft pick.

There has been speculation around Johnson's future for the majority of the offseason. Quarterback Baker Mayfield was asked about Johnson's status in June, and said: "He's going to handle his stuff how he wants, but you're either on this train or you're not, it's moving. You can get out of the way or you can join us."

Now, Johnson is headed to a franchise that is still figuring out their backfield situation after waiving former first-round pick D'Onta Foreman earlier this week.

Kansas City Chiefs coach Andy Reid revealed his plan for utilising his quarterbacks for Saturday's preseason game against the Cincinnati Bengals. He intends to start quarterback Patrick Mahomes and keep him in for the first quarter.

Reid has been known to play his starting quarterbacks during the preseason in the past, but the move is a bit unusual because coaches generally prefer to sit their quarterbacks to avoid risking injury.

Back-up Chad Henne is expected to play during the second quarter, while Chase Litton will take over in the third and rookie Kyle Shurmur will play in the fourth, according to CBS Sports.

Mark this one as one of the most unusual stories to come out of training camp: Minnesota Vikings quarterback Kirk Cousins is bothered by first-round draft pick Garrett Bradbury's sweaty butt. Cousins said he is concerned Bradbury's sweat will affect his grip on the ball.

"He promises that it's not a problem in games, and it remains to be seen because his shorts today were soaked," Cousins said, via the Star Tribune. "Apparently when they keep those domes air-conditioned and you get a break on the bench and you sit with the cooling fans, I'm hoping that really helps."

The first big test will come when the Vikings open their preseason against the New Orleans Saints.

"A big thing I'm going to take away from Friday night, is how tough was it to grip the ball after he snaps it to me. If it's tough we might be in pistol and shotgun [formations] all year," Cousins said.

Dallas Cowboys defensive end Robert Quinn is facing a two-game suspension for violating the league's policy on performance-enhancing substances. He is eligible to return on September 15 after the Cowboys play the Washington Redskins in week two.

Normally this would be a significant loss for the Cowboys, who are struggling with depth at the position, but Quinn broke his hand in practice earlier this week. His availability for the first couple of games of the regular season were already in question.

Saquon Barkley is working on his throwing game – kind of. The New York Giants running back attempted to throw a "no-look" pass, similar to one Chiefs quarterback Patrick Mahomes has thrown, but it did not go exactly as planned.

"No-look. Mahomes." @saquon's impression did not go according to plan  pic.twitter.com/rhTa1n5ZSa

Pittsburgh Steelers receiver JuJu Smith-Schuster is putting in some work this offseason. He caught 370 balls from a football passing machine after practice.