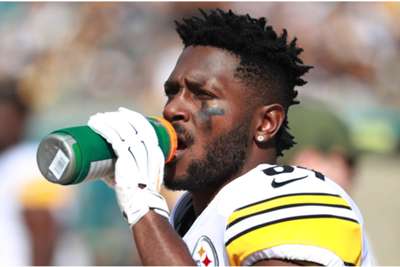 Oakland Raiders star Antonio Brown had his grievance over his new NFL helmet denied by an arbitrator.

While Monday's ruling did not go in his favour, Brown – a seven-time Pro Bowler – announced he will make his way back to the Raiders when he is at "full health".

"While I disagree with the arbitrator's decision, I'm working on getting back to full health and looking forward to re-joining my team-mates on the field," he wrote on Instagram. "I'm excited about this season appreciate all the concerns about my feet!"

Brown had previously said, according to a report from The Athletic, which cited a source with knowledge of Friday's hearing, "he would hold the league liable" if he were to suffer a head injury while playing in the league-mandated helmets.

"While I disagree with the arbitrator's decision, I'm working on getting back to full health and looking forward to rejoining my teammates on the field. I'm excited about this season appreciate all the concerns about my feet!” #AlwaysAFight #Represent #itsbiggerthanme

The Raiders brought Brown on board with the hopes of reviving an inconsistent offense that finished with a 4-12 record last season.

Brown has already missed the team's first preseason game, however, he still has the support of Raiders head coach Jon Gruden.

"There's been a lot of reports out there, I can't say I agree with all of them, certainly. But I support this guy. I think that's what needs to be said," Gruden said. "I don't know what anybody's writing or what anybody thinks but this foot injury wasn't his fault. This was a total accident. It really wasn't his fault, and it's a serious injury.

"I know some people are [smirking] at it but it's really not a laughing matter. The guy was hurt. He's innocent, he didn't do anything wrong. And the helmet thing is a personal matter to him. He has a strong feeling about what he's worn on his head and we're supporting him. We understand the league's position as well, so we're in a tough spot. And we hope Antonio is back here soon, because he's exciting to be around. I'm excited. I got some plays for him, I hope we can start calling them."

Brown started training camp on the non-football injury list with a "minor injury." The injury turned out to be frostbite on his feet from a cryotherapy machine after using it "without the proper footwear," but that was not what was keeping Brown from playing, according to reports.

It was reported league-wide Friday that it was, in fact, Brown's helmet grievance, not his injury, that has kept him off the field.