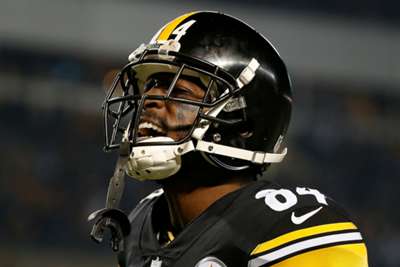 If you thought the first week of preseason was intense, the second should bring even more excitement.

One player will not be around to see it firsthand after announcing his retirement on Monday, while another notable absence from last week could come to an end soon.

This is not the news Antonio Brown wanted to hear, considering the Oakland Raiders wide receiver threatened to sit out the season if he is not allowed to wear his old helmet and reportedly vowed to hold the league liable for any future head injuries he may endure. On top of his equipment issue, Brown is also dealing with blisters that stem from frostbite on his feet after he used a cryotherapy machine without the correct footwear.

"The player can't practice or play in games with equipment that's not approved," NFL spokesperson Brian McCarthy said in a statement. "If he doesn't play or practice he is in breach of his contract and doesn't get paid."

An arbitrator ruled against Brown on Monday and he later commented on the issue, saying he is "working on getting back to full health and looking forward to re-joining my team-mates on the field." Does that mean he's over "Helmetgate" already? We will keep the popcorn handy.

Washington Redskins head coach Jay Gruden will not make his starting quarterback decision until after the team's third preseason game. But he appears to have the depth chart in mind as he said 15th overall pick Dwayne Haskins is chasing Colt McCoy and Case Keenum.

McCoy stepped in for an injured Alex Smith last season, only to suffer a broken leg a couple weeks later. Keenum got the start in Washington's preseason opener against the Cleveland Browns last week, but there is still plenty of time for McCoy and Haskins to get some work in.

While it is unlikely to happen, New York Jets safety Jamal Adams felt the need to offer his services at cornerback to highlight the severity of the situation after Trumaine Johnson went down with an injury Sunday at practice. While Johnson is listed as week to week, head coach Adam Gase could not guarantee his availability for the regular-season opener against the Buffalo Bills on September 8.

"That's just going to be time," Gase said. "I don't think it will be months, but, I mean, we'll see. It's week to week right now. It'll be about how his body responds to the rehab."

Brady's Boston-area home is for sale

But that is no reason to panic, as Tom Brady assured his lavish mansion will require some time to find an earnest buyer.

"You shouldn’t read into anything," Brady said on WEEI Radio. "It takes a long time to sell a house."

The 42-year-old New England Patriots quarterback also addressed his contract situation and the ongoing rumours that his career could be nearing an end as he reiterated that he is not serious about retirement yet.

"I am certainly at a place — we have been at the same place for a long time and I love playing for the Patriots," Brady added. "I have such a great relationship with Mr. Kraft and Coach Belichick and our team. We'll worry about that when that happens. This isn't the time to worry about it."

Matthews retires after release from Saints

Two days after he was cut by the New Orleans Saints with a left squad designation for leaving training camp, the 29-year-old wide receiver has decided to call it a career in an unusual and fiery way.

"Rishard Matthews the football player [sic] No Longer Exist & it's okay. In life regardless of the right or wrong decisions I've made," Matthews wrote on Instagram. "I've always moved forward with the understanding that regardless of what I'm going through someone is going through something a s*** ton worse than my bull****. For athletes it's important to understand [sic] & Move the f*** on."

Matthews had requested his release from the Tennessee Titans last September and signed with the Jets the following month, but ended last season on injured reserve. He signed with the Saints in June and appeared in last week's preseason opener before deciding to hang up his helmet for good.

Indianapolis Colts rookie cornerback and 2019 second-round draft pick Rock Ya-Sin is already turning heads with his physicality on this snag.