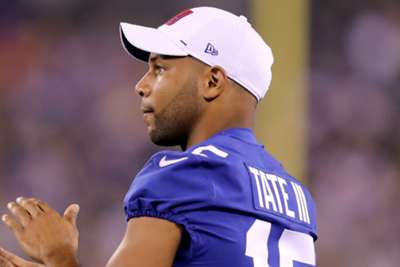 New York Giants wide receiver Golden Tate will have to serve his four-game suspension for a positive performance-enhancing drugs test.

Tate, 31, said the substance came from prescribed fertility medication, but an arbiter ruled against his appeal on Tuesday.

He is entering his first season with New York, who will now be without their key acquisition as they work through their offense.

"This morning, I received the unfortunate news that my appeal was denied," Tate said in a statement on Tuesday.

"I went into this arbitration with the understanding that due to the facts, unlike many other cases, we could be the exception to win.

"Unfortunately the NFL stood by their no tolerance policy, which I hope one day to help have a part in reforming, so no other player has to go through this situation."

The Pro Bowl player explained the positive test was a result of a treatment he was prescribed from a fertility specialist.

Tate wrote in a previous statement he stopped taking the prescription when he learned an ingredient was on the NFL's banned substance list.

He said he went through the proper protocol and informed the league before he was suspended.

"This past April, during the off-season, my wife and I decided to see a specialist for fertility planning," the statement from Tate read.

"I started the treatment prescribed to me and just days later I discovered it contained an ingredient that is on the league's banned substance list. I immediately discontinued use, I reported the situation to the Independent Administrator of the NFL Policy on Performance-Enhancing Substances, and I spoke with my coaches and general manager."

Tate's absence will be a big loss for the Giants, who are already struggling with depth at the receiver position without Odell Beckham Jr.