Antonio Brown: My feet are ´circumcised´ after freak injury 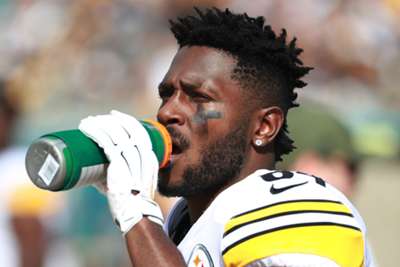 Antonio Brown had cold therapy in Paris this offseason to aid his recovery, but the Oakland Raiders wide receiver ended up with frostbitten feet that felt like they were "circumcised".

The seven-time Pro Bowler, acquired by the Raiders in a blockbuster trade with the Pittsburgh Steelers in March, was absent from practices earlier this month with a foot injury he sustained in France.

On the second episode of Hard Knocks, which aired on Tuesday, Brown explained how the freak injury came about.

"I was on vacation in Paris. I was training and I was trying cold therapy to recover my body," he said.

"I got out and I felt my foot burning. I felt a hot sensation. So [within] 24 hours, it swells up, got really big. I couldn't really walk or put pressure [on it].

"As everything leaked all out I was able to put a lot of pressure. Thankfully my trainer was working me out. I can't be on my feet so I was crawling within workouts.

"I let everything get better. Now it's new skin, I'm trying to get my feet used to feeling it. But it feels like I've got a big patch of just open, [a] whoopee cushion."

The star wide receiver also displayed his feet to the cameras and discussed the injury further with Raiders staff.

"My feet are pretty much getting circumcised, right?" he said when told he was walking "a little funny".

"I got circumcised on my feet. Hopefully my feet [are] born again and I frickin' can run faster.

"Feel sorry for me later, thank you."

Brown returned to training camp on Tuesday, a day after an arbitrator ruled the 31-year-old could not wear the helmet he has used throughout his career due to changes in regulations.

Though there were reports Brown would walk away from the NFL should his grievance be denied, he said on Monday he was "looking forward to rejoining my team-mates on the field".

In the wake of the arbitrator's ruling, Brown also posted a message on Twitter requesting a newer version of his former helmet that would comply with the rules.

"While I disagree with the arbitrator's decision, I'm working on getting back to full health and looking forward to rejoining my teammates on the field. I'm excited about this season appreciate all the concerns about my feet !” #AlwaysAFight #Represent #itsbiggerthanme