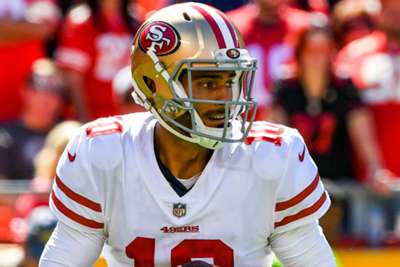 The San Francisco 49ers and their fans are excited to see what quarterback Jimmy Garoppolo can do in a full season, so Wednesday's practice was a terrible indicator of things to come.

"He threw it to the wrong team five plays in a row," Shanahan told reporters. "I was a defensive coach today, so I was pumped. But no, the defense did great today and obviously he struggled.

"You hope to never have a day like that, but I don't think it's never not happened to anyone. When you do that, you hope you can practice long enough and give him a chance to play out of it and use it as an opportunity that hopefully you can do in a game.

"Hopefully you don't have five in the game, but you can play yourself out of two in a row or something like that."

The 49ers face the Denver Broncos on Monday and Garoppolo will make his preseason debut – his first on-field action since he tore his anterior cruciate ligament last September.

San Francisco are expecting more of the Garoppolo who sparked the team to a 5-0 run to finish the 2017 season instead of the five-INT practice from Wednesday.

Last week, Shanahan said the 49ers are being cautious bringing their quarterback along from the injury.

"I expect him to definitely play in [preseason games] two and three," Shanahan said. "But, nothing's mapped out and set in stone yet. We kind of take it day by day with that, but that's something you're always thinking about. Definitely planning on going in two and three."