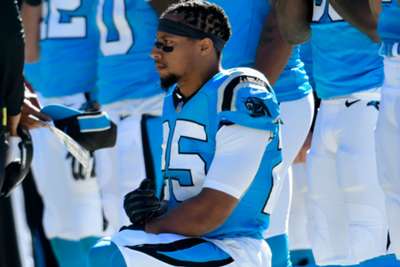 The NFL announced a partnership with rapper Jay-Z and the Carolina Panthers' Eric Reid responded to the development, which led to quite a bit of discussion on Thursday.

Plenty of that talk centred around Reid's friend Colin Kaepernick.

While Kaepernick is looking for a job in the NFL, Denver Broncos defensive end Bradley Chubb is looking to build on a successful rookie season.

And then there is the developing quarterback battle in Tennessee.

Those stories and more in Thursday's edition of NFL news and notes.

Reid's response to Jay-Z's partnership with the NFL

Panthers defensive back Reid is continuing to speak his mind.

Although Jay-Z has been a vocal supporter of Kaepernick's national anthem protests, the rapper agreed to partner with the NFL and assist it with its musical and entertainment endeavours moving forward and hopes to improve its social justice initiatives along the way.

Reid fired back after the announcement of the deal via Twitter late on Wednesday, claiming the agreement was "burying" Kaepernick's career, as the former San Francisco 49ers quarterback has not been on an NFL team since 2016 and is still working to find a job this season.

These aren’t mutually exclusive. They can both happen at the same time! It looks like your goal was to make millions and millions of dollars by assisting the NFL in burying Colin’s career. https://t.co/LFBZpbj2tw

Given the day-to-day interactions between entertainment and the NFL, Reid will likely become vocal more throughout the 2019 season. It will be something to keep an eye on for sure.

The NC State product set a franchise rookie record last year by recording 12 sacks and says he has not played to the best of his abilities just yet.

Chubb does not care about being a household name, but told NFL Network he is ready to unveil some fun "antics" in year two. Perhaps something similar to when he stole Clemson quarterback Kelly Bryant's towel twice in college.

Chubb's improvement and personality could put him in the national spotlight, and another defensive stud next to Von Miller would make for some great entertainment.

It has become evident that Marcus Mariota is not a shoo-in to start for Tennessee, as reserve signal-caller Ryan Tannehill is making his case for the top spot.

Mariota is convinced he does not need to compete with Tannehill to win the job though.

"When it comes down to it, I am just competing against myself," Mariota said on Thursday. "I just try to be the best version that I can be, day in and day out."

The 25-year-old might be facing some pressure to perform against the New England Patriots in Saturday's preseason matchup.

Antonio Brown's feud with a chef

The chef claims he and his staff were hired to make meals for nearly 50 of Brown's Pro Bowl team-mates in January but allegedly received no payment and he was barred from retrieving his equipment and food from an Orlando mansion Brown had rented.

This is a little bizarre, but we have come to expect things like this from Brown so it is not that surprising.

Brown's frostbitten feet and helmet conundrum are certainly more pressing for Oakland than his spat with a chef.

The XFL announced on Thursday it has signed Jones as its first player and quarterback.

Jones will be one of the league's eight "leading quarterbacks" that will be signed in the coming months.

The 30-year-old spent five seasons with the Pittsburgh Steelers and has not seen NFL action since 2017, so you probably should not expect him to make to much noise.

So, in front of the @Raiders , I thought I was cool & could sing “Lean on Me” better than @renfrowhunter on #hardknocks . I was #BRUTAL & #totallydiscombobulated
Maybe some footage will show up somewhere.
Then Jon Gruden and I made this silly video. #chucky
@derekcarrqb @nfl pic.twitter.com/tHEEPZKzGm